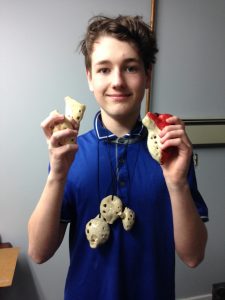 For Kelly Hems, a Grade 10 student from Winnipeg, being named one of six NUFSICISUM Award winners was both an honour and a surprise. Though his music teacher had previously told him about the nomination, he’d forgotten all about it. This seems only natural for someone as busy as Kelly, a multi-instrumentalist who also composes, and makes his own instruments out of ceramics. Kelly showed an interest in music from a young age, and took both piano and drum lessons, which led to getting involved in his school’s band and choir programs, beginning in Grade 7. Since then, he has joined every ensemble that he could, including Concert Choir, Junior Choir, Senior Vocal Jazz, Concert Band, and Senior Jazz Band, as well as the Winnipeg Youth Wind Ensemble outside of school.

Kelly says he first got involved in music because it seemed cool, and never expected it to become such a big part of his life. And although he has been active in his music program at school and eager to take every musical opportunity that came his way, Kelly didn’t think of himself as holding a leadership role. Based on his NUFSICISUM nomination form, which was full of praise for Kelly’s ability to connect with students from Grade 7-12 at any stage of musical development, and the tremendous contributions he’s made to his school, it’s safe to say that Kelly’s music teacher does not share this opinion.

One thing Kelly and his teacher would likely agree on, however, is the importance of music education. Kelly describes music as a “really great art” that “helps people express themselves.” The music program at Kelly’s school has given him a lot of great opportunities, and he says that all of his experiences have been memorable, but the one that stands out the most is performing the lead role in Little Shop of Horrors, his first musical.

Kelly is committed to challenging himself through music, and to doing everything he can to improve as a musician and composer, such as attending International Music Camp over the summer. He wants to continue learning more instruments (he already plays tuba, trombone, percussion, piano, recorder, and others), building instruments at home, and playing in as

many ensembles as possible. He plans to use part of his $200 NUFSICISUM prize to buy more ceramics supplies and take trips to Long & McQuade, and save the rest for the future.