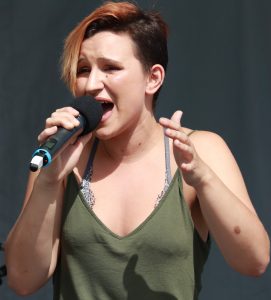 To say that music has been central to singer-songwriter Nicole Haber’s life would be an understatement: Nicole started singing at age four, and wrote her first song at age six. What began as an outlet for her creativity is now, at age 23, her passion and her calling, and what she describes as “the only thing I have never gotten bored of.”

As a child, though she had a keen interest in singing and making music, her family’s financial circumstances prevented Nicole from receiving formal training. Fortunately, Nicole’s elementary school had a wonderfully supportive music teacher who helped train her in music as much as possible. “She gave me the tools to keep my passion alive and learn on my own,” Nicole said of her teacher, who she remains Facebook friends with. Nicole was also fortunate to attend a high school with a strong arts program, where she was able “to take as many music, acting and vocal classes as I wanted to.” In high school she also had the opportunity to participate in the annual musicals, and was surrounded by a supportive group of friends and teachers who encouraged her to do more and pursue her dreams.

Pursuing her dreams, however, did not come without challenges. When Nicole began theatre college she was told that she had problems with her vocal technique. Though extremely discouraged (“this hurt and almost made me quit singing entirely”), Nicole made a plan to strengthen her voice, and decided to start fresh with classical singing. She worked with several vocal coaches and credits Lorraine Lawson of Lawson Vocal Studios with equipping her with the tools to address bad vocal habits, and helping her get to the point where she feels “comfortable and proud to be singing again, both vocally and physically.”

With her confidence in her singing restored, Nicole is free to focus on what drives her: creating new music. She is always striving to evolve sonically and lyrically, drawing from jazz, rock, pop, and soul in creating EDM and electro-pop music. She recently began exploring acoustic music as well, and “brought out the old guitars and piano to work on creating more of my music from scratch.”

Just as Nicole benefitted from the support of her teachers and peers, she makes a point of befriending and supporting fellow musicians, and advises other young musicians to do the same. Not only does this help build community among young artists, but as Nicole points out, “You never know  when you may need each others’ help… Good energy pays off and people like working with humble and kindhearted people.”

After years of learning as much as she could about singing, recording, mixing, and producing, Nicole’s hard work and determination have paid off. She recently overcame a six-year writer’s block to create an EP, and released a video for her single “Happy Pill.” Through the wonders of modern technology she continues to collaborate with DJs from around the world, and is currently working on new solo music and gearing up for some live performances; as she says, “There is always something new to create.”